A gold dredge retrieves sediment (such as and, gravel or dirt) from a gold placer deposit, e.g. a river bed, using suction. They are less labour intensive than panning.

During the first half of the 20th century, large multi-story gold dredges were built. Today, considerably smaller gold dredges are sold to individuals interested in seeking gold. 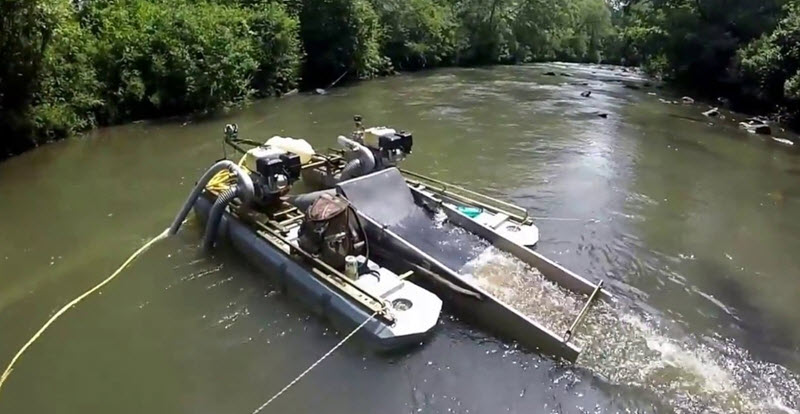 The large type of gold dredge typically feature steel buckets fastened on a circular, continuous ”bucketline”. Sediments are picked up by these buckets, and dumped into a steel rotating cylinder – a kind of trommel commonly referred to simply as ”the screen”. The trommel is sloped downward toward a rubber belt (”the stacker”), which transports oversized materials such rocks and dump them behind the dredge. At the same time, small objects – including gold – are allowed to escape through small holes in the cylinder and are dumped into a sluice box.

The sluice box works the normal way that we are familiar with from many different types of gold extraction operations. Gold is heavy and will settle at the bottom together with other heavy materials, while lighter materials such as dirt and light sand will wash away.

During the early days of the California gold rush, there was quite a lot of placer gold around that could be accessed comparatively easy and didn´t require much of an investment in equipment to be extracted in a profitable manner.

The California gold rush ended in 1855 when most of the easily accessible placer gold had been removed, but that didn´t mean that there was no gold left at this point. Gold could still be extracted in a profitable fashion by those who had the resources to invest in heavy equippment and carry out large-scale operations. After this point, gold extraction in California began moving away from small-scale individual operations to big companies operating big machines. Eventually, massive gold dredges were employed to scope up millions of tons of river gravel.

The last one of these massive gold dredges used in Calfornia was in operation as late as the 1960s. It was the Natomas Number 6 dredge in Folsom and it kept running until February 12, 1962. It was taken out of work because the cost of operating it had began to exceed the value of the retrieved gold. In New Zealand, the last massive gold dredge was in operation until 2004. It extracted gold from the Grey River, which is one of New Zealand´s West Coast rivers.

Even though most of the massive gold dredges around the world are longer in use, some have survived into our time and are kept as mementoes of the past. If you want to see one, you can, for instance, visit the Sumpter Valley Gold Dredge in Oregon, USA or Dredge No. 4 in Yukon, Canada. In 2015, the gold miner Tony Beets reconstructed a 70-year-old dredge for the Discovery Channel TV-show Gold Rush, and turned it into the only operating massive gold dredge in Klondike.

Many of the modern gold dredges are designed to be placed on a floating device and operated floating on the water instead of being stationary on land. Instead of buckets, a vacuum hose is used to suck up sediment.

Some modern gold dredges are small enough to be carried on the back of a pick-up or even smaller four-wheeler to rivers and streams.

Gold dredging has become a controversial environmental topic, and in some waterways regulation has been put in place to prevent gold dredgers from disturbing animals, including fish, that make their nests in the sediment.