Placer gold mining is the mining of alluvial (stream bed) gold deposits. It can be open-pit style or require surface excavation or tunnelling. Open-pit style mining is also known as open-cast mining.

Gold is often found in alluvial deposits in either modern or ancient stream beds, and sometimes even in glacial deposits. The gold has been moved from its original source by the stream, and since it is heavier than sand it tends to eventually accumulate at the base of placer deposits.

Placer gold mining often involves the use of water or dredging. Tunnelling in an alluvial placer mine can be risky, since the material may be very loose and the tunnels become prone to collapse. In some places, tunnelling is only possible because of the permafrost.

Traditional gold panning is a technique where a wide, shallow pan is filled with sand and gravel that may contain gold. The pan with its contents is then submerged in water and shaken, which causes the dense gold to settle at the bottom of the pan. 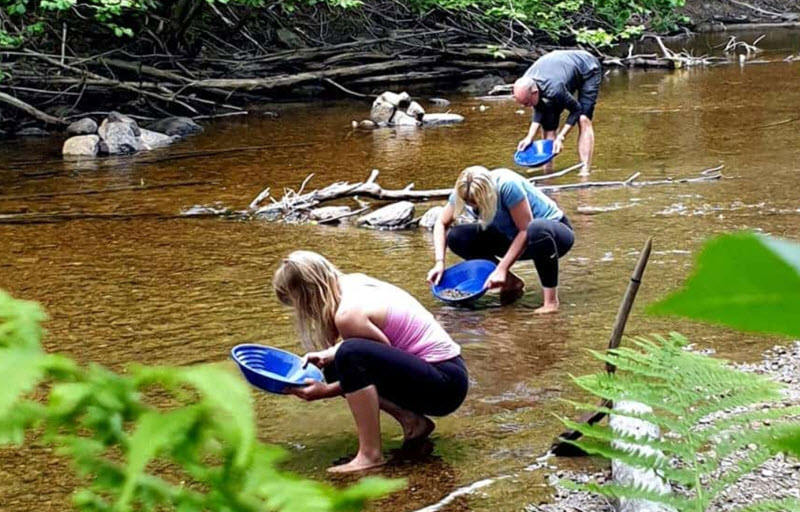 The material that goes into the pan typically comes from a stream bed. The inside turn in the stream is especially prone to have gold deposits. The bedrock shelf of the stream is another good option.

Gold panning is a method that requires very little investments in the form of equipment, but it is labour intensive. Labour costs need to be low and gold traces substantial for it to be commercially viable.

Nowadays, gold panning is often a hobby or tourist attraction in former goldfields. Panning is also used when searching for new sources of gold and to evaluate new spots for commercial viability.

A channel is dug and riffles are set in the bottom of it. These riffles create “dead zones” in the current, where gold and other dense materials that have been carried by the current will fall to the bottom and settle behind the riffles.

Large-scale slucing operations usually emply screening plants, or trommels, that remove larger alluvial materials (e.g. gravel and boulders) to prevent them from getting into the sluice box. 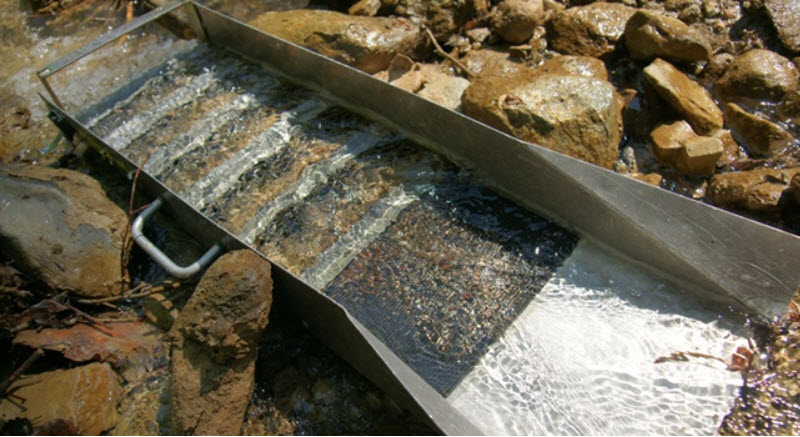 A suction dredge consists of a sluice box attached to a suction hose. The device will be floating on the water (e.g. on a river or stream) supported by pontoons or some other floating device. The suction hose is controlled by a person working in the water. Sediment is sucked into the hose and emptied into the sluice box.

Hard rock gold mining can be open-pit or underground. Examples of large open-pit operations are the Fort Knox Mine in Alaska and the Goldstrike Mine in Nevada.

For underground mining, tunnels and/or shafts are excavated. Some of the largest operations are found in South Africa, where some mines go down several thousand meters below the surface. At such great depts, the temperature is very high.

Gold can be recovered as a by-product from other mining operations. The Grasberg Mine in Papua, Indonesia is for instance primarily a copper mine, but recover very large amounts of gold to each year. Another example is the copper mine Bingham Canyon Mine in Utah, USA, which also recovers substantial amounts of gold.