A gold rush occurs when a rush of prospective miners flock to a location where gold has just been found. The 1800s was noted for its multitude of gold rushes, taking place in many different parts of the world, including the United States, Canada, Brazil, Australia, New Zealand, and South Africa. It would be wrong, however, to assume that gold rushes didn´t exist before the 19th century, because gold rushes did for instance occur in the Roman Empire. 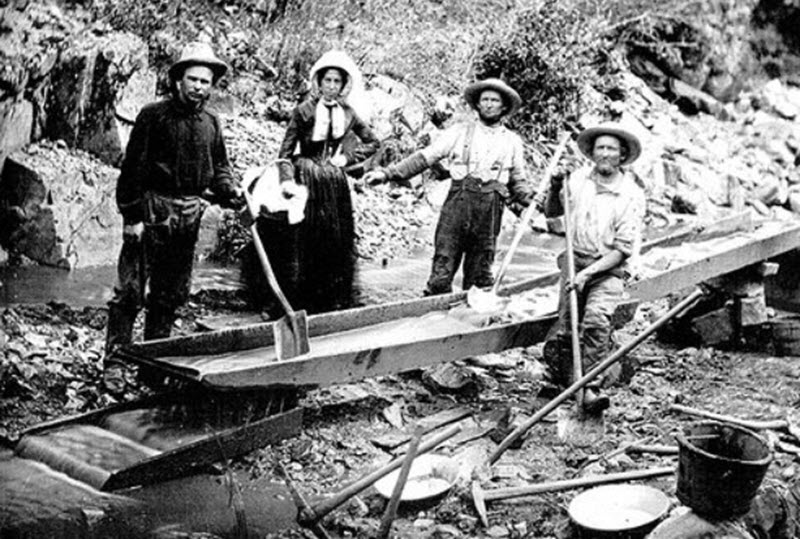 One of the most famous of the 19th century gold rushes was the California Gold Rush, which began in January 1848 when James W. Marshall found gold at Sutter´s Mill in Coloma, California.

Among the first gold-seekers to arrive from outside California were people from such different places as Oregon, the Sandwich Islands (Hawaii) and several parts of Latin America. The peak year for gold rush migration into California was 1849, which gave the gold-seekers the nickname ”forty-niners”.

Of the people that game to California during the gold rush, approximately 50% travelled by sea and the rest came overland. The two main overland trails were the California Trail and the Gila River Trail.

The California Gold Rush would come to have powerful and long-lasting consequences. Among other things, it fueld the California Genocide which resulted in the dramatic decrease of the indigenous population in California. The gold rush also sped up California´s path to statehood and the sudden influx of gold reinvigorated the United States economy. Agriculture and ranching expanded in California to provide the growing population with food, and San Francisco grew from a modest settlement of less than 250 residents in 1846 to a town housing over 36,000 people in 1852.

When the gold rush started, the thinly populated California was on the brink of being ceeded to the U.S. by Mexico. When the gold rush ended in the mid-1850s, California had a state constitution, was one of the United States of America, and it´s Senator John C. Frémont had been selected to be the first presidential nominee for the new Republic Party.

Taking place in 1896-1899, the Klondike Gold Rush was one of the last major gold rushes of the 19th century. It started when local miners George Carmack and Skookum Jim found gold in the Klondike region of the Yukon, in north-western Canada, on August 16, 1896.

During the peak years, roughly 100,000 people set out for the gold fields, but it was only approximately 30,000 – 40,000 of them that actually made it all the way to the gold fields. The peak of the rush took place in 1897-1898 when news about the gold had reached Seattle and San Francisco. Even though the Klondike Gold Rush was fairly short-lived, it made a very notable impact on popular culture; including books, films and photography.

The most popular route to reach the goldfields was the one that utilized the ports Dyea and Skagway in Southeast Alaska. The prospectors could follow the Chilkoot or the White Pass trails to reach the Yukon River, and then sail to Klondike. To decrease the risk of starvation among prospectors, the Canadian authorities instate a rule that required each individual to bring along a year´s supply of food.

Boom towns grew up along the routes, including Dawson City which is located where the Klondike River meets the Yukon River. In 1896, this was a settlement of roughly 500 people. By the summer of 1898, the town was home to about 30,000 people.

The Klondike Gold Rush had harsh negative consequences for the native Hän people of the area, who were forcibly moved to a reserve. The Hän also suffered a high mortality from the infectious diseases brought in by the many gold-seekers.

The most frenzied part of the Klondike Gold Rush largely ended when gold was discovered in Nome in west Alaska in 1899, but the gold mining production in the Klondike didn´t reach its peak until 1903. (At this point, heavier equipment had been brought in which increasedt he extraction rate.)